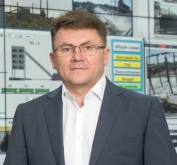 Vitaliy Litovka was born on 12 March 1972 in Kryvyi Rih. He is married and has a daughter and a son. Vitaliy graduated from Kyiv National Economic University with a degree in Economics and Production Management.

"I plan to make Avdiivka Coke the best plant in the company. Unfortunately, years of war had a negative effect on the plant condition, for objective reasons. I appreciate Avdiivka coke makers managed to keep the enterprise when they had to undertake hot mothballing of the coke-oven batteries and work amid shelling. I wouldn't wish such experience on anyone. But we need to move forward. We have a lot to do for the enterprise to be among leaders of coke making," says Vitaliy Litovka.

As reported earlier, Musa Magomedov who had been in charge of the city-forming enterprise since November 2012, won elections in the single-member district # 45 (Avdiivka, Yasinovatskiy district) having received 64.60% votes, and now defends the interests of the community in Verkhovna Rada of Ukraine.

As a reminder, Avdiivka Coke Plant has been on the line of demarcation since June 2014. During this time, 320 shells exploded on the plant territory, 12 Avdiivka Coke employees were killed, and over 50 employees were wounded. Avdiivka Coke stopped its operations 15 times and experienced complete de-energisation more than 200 times.