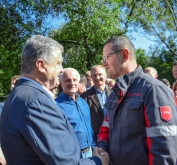 President of Ukraine Pyotr Poroshenko visited the frontline town of Avdiivka and emphasised the great contribution of Avdiivka Coke Plant (AKKhZ) to the development and sustainment of the town. The Ocheretino-Avdiika gas pipeline began its operation in August; its construction was funded by Avdiivka Coke in cooperation with the municipal authorities.

The pipeline supplying gas to the residents of the town and neighbouring areas was damaged during the military operations in June 2017. One month later, the construction of the new Ocheretino-Avdiivka main gas pipeline was started on the government-controlled territory of Ukraine. The supply of gas to Avdiivka was finally resumed in August this year. Avdiivka Coke allocated about UAH 29 million for the construction of the vital facility.

Since the start of military operations in the east of Ukraine in 2014, Avdiivka Coke has been shelled over three hundred times, and over two hundred times the enterprise was cut off from electricity. Heavy shelling in August 2014 left Avdiivka Coke without the power supply forcing it to mothball some of its production facilities. It was only in May 2017 when the plant was able to regain its full capacity and put coke oven battery No. 8 back into operation.

All this time Avdiivka Coke continued to help the town. In the last year alone, the plant helped renew three public schools and three daycares along with a clinic for railways employees, and added a new bus to the municipal bus fleet. The repair works in the neurology department of the only hospital in the town is close to completion. Over 100 residents received construction materials for renovation of their houses damaged by shelling. Moreover, the plant initiated a "Change Avdiivka Together" competition of residential areas landscaping projects. The plant continues to support gifted and talented kids by providing scholarships to straight A-students and Olympiad winners.

- A city-forming enterprise is not only about production. It is also about jobs, heat supply, the functioning of the town, and certainly about the responsibility of authorities to a Ukrainian producer. What we can see now is Avdiivka hiring new workers and creating new jobs at a Ukrainian manufacturing plant.

- Avdiivka definitely and finally has gas now. Before this, the words of gratitude were expressed by the residents of the town and neighbouring areas, whereas today they came from President of Ukraine Pyotr Poroshenko. The is the result of joint efforts made by the authorities and business, where the supply of gas to our people is the main achievement. Last year, we resolved the problem with electricity supply, and this year we resolved the problem with gas. There is one more issue that remains open and this is reliable water supply, but I am sure it will be resolved as well.

Avdiivka Coke Plant (AKKhZ is a member of Metinvest Group) is a city-forming enterprise and the largest tax payer in Avdiivka accounting for 2/3 of the municipal budget. The plant is only supplier of heat for multi-storey residential houses, public schools and daycares, clinics ad administrative institutions of the town. It supplies heat at the lowest price in Ukraine. In the last seven years, Metinvest invested UAH 65 millions in the development of Avdiivka. The funds are allocated for the restoration of houses and social facilities that were damaged by shelling, for charity, support of education, healthcare, culture and sports systems, for the development of transport infrastructure, and football. In 2018, the plant continues to support the town of Avdiivka and its people.