Metinvest to Allocate Over UAH 16 million for Avdiivka 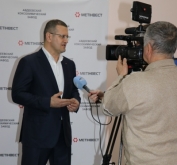 Avdiivka Coke and Chemicals Plant (AKKhZ) of Metinvest Group and the administration of Avdiivka signed a Social Partnership Agreement for 2018. Financing of social programs will amount to UAH 16.6 million.

The Agreement was signed by Musa Magomedov, Avdiivka Coke's General Director, and Pavel Malykhin, the Head of Military and Civil Administration.

Avdiivka Coke is the largest taxpayer of Avdiivka that forms 67% of the city's treasury. Besides fulfilling all the legislative requirements, the plant has assumed additional social responsibility: it takes an active part in the restoration and development of the city. In 2017, Avdiivka Coke allocated UAH 11.9 million for social programs. These funds were used to perform major overhauls in three high schools and three kindergartens, the clinic was refurbished, and the city's transport fleet was provided with a modern passenger bus. More than 100 city residents received the construction materials for rebuilding their houses that were hit by shelling.

According to the decision of Rinat Akhmetov, SCM shareholder, UAH 28.9 million were allocated to the city budget for the construction of the Ocheretino-Avdiivka gas pipeline. Avdiivka Coke remains the only source of heat supply for Avdiivka. Despite technical difficulties, the plant has found a way to fill the heating system with water and started the heating season on time. Avdiivka residents continue to receive heat at the lowest prices in the region.

In 2018, within the framework of cooperation of the city, Avdiivka Coke plans to repair the infectious board of the city's only hospital, and to repair the interior in three schools and two kindergartens. Public transport will be provided with one more bus; new playgrounds and street lights will be arranged in the city. This year, the plant initiated a competition of projects for the improvement of house yards called "We will transform Avdiivka together". The enterprise will continue supporting the gifted children of the city: excellent students and winners of the Olympiads will be granted scholarships.

- The last few years, Avdiivka had to withstand many shocks. The city managed to survive, the plant started to operate at its full capacity and helped restore the housing stock and infrastructure. The whole world watched and empathized with Avdiivka residents. And we have always been beside. For seven years of cooperation, we have invested UAH 65 million in the development of the city; and we will continue to do this. Because we know that the city and the plant have same future.

- We try to do everything to make the city develop and be comfortable for life. The priority of this year is to repair educational, health and sports facilities. So, the central stadium will be provided with a new court for volleyball and tennis. Another dream of Avdiivka residents will become closer with the start of designing the first city's swimming pool. Together with Avdiivka residents we will put in order the houses and house yards. The competition called "We will transform Avdiivka together" has been already started with a prize fund of UAH 1 million.

Pavel Malykhin, Head of Military and Civil Administration in Avdiivka:

- It is obvious that life in the city can be improved only if there is close cooperation between business, local authorities and, of course, with the active participation of residents. Avdiivka Coke Plant is our friend and aid. Plant employees always support the city. The plant provides jobs and timely wages to almost four thousand local residents. The plant is also the largest taxpayer in the city. With such a reliable partner, we are confident in the future.