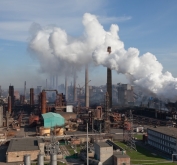 Amid military actions, the coke plant had to generate its own electric power to cover internal needs using natural gas because of continuous interruptions in the power supply since the end of January. Two coke workshops out of four went through hot mothballing. Recovery workshops were also halted. As a result, some enterprise workers were sent home on reduced pay.

Before May 2017, the electric power was supplied to Avdiivka from the occupied territory, and the transmission line went through the military action zone, which led to frequent power line damages and subsequent power failure in the city and at the plant. Amid failed ceasefire, it was not possible to perform the repair work. The decision was made to built a new power transmission line on Ukraine-controlled territory. It took several months for DTEK specialists and Avdiivka Coke power engineers to build a power line that was vitally important for the city, neighbouring villages and the city-forming enterprise. All work was finished ahead of schedule. In the early May, the coke plant got connected to the new power transmission line.

Resumption of power supply to the enterprise after its long downtime made it possible to put back into operation coke workshops No.3 and No.4, desulphurization workshop No.2 and recovery workshop No.2. This allowed to increase daily wharf coke output from 5.5 ths.t to 7.5 ths.t making Avdiivka Coke plan even further ramp-up.

- Long mothballing of coke ovens was quite a trial for the coke oven brick lining.  It is only due dedicated work and professionalism of our coke-makers that we have been able to preserve main production facilities and resume the operation of all workshops. Now we will be able to increase our capacity utilization and coke production.

As a reminder,  Avdiivka Coke and the local civil-military administration signed a Social Partnership Agreement for 2017. Avdiivka Coke will allocate UAH 11.9 million for social programs this year. Over six years of cooperation Metinvest has invested UAH 53.1 million into the development of Avdiivka. The funds were directed to the repair of schools and kindergartens, infrastructure development, creation of conditions for active life style of people in Avdiivka, support of healthcare system and provision of assistance to socially vulnerable population groups.