Avdiivka Coke: the plant is operating as normal 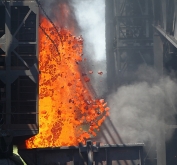 DTEK's specialists together with Avdiivka Coke's power engineers restored the functioning of two high-voltage in-feeds of power transmission lines feeding the plant on Friday, December 9.  This made it possible for the coke plant to restore its normal mode of operation and consistent utilization of coke ovens, streamline the coke production and re-introduce the chemical shops back into the process.

Furthermore, restored power supply enabled the city's mainstay enterprise to supply heat to all households and establishments in Avdiivka that does not have alternative sources of heat.

As reported earlier, the plant lost its power supply at night on December 7 as a result of combat operations. Avdiivka Coke's main equipment was promptly switched to a standby power source - in-house natural gas-fired generation. Two coke shops had to be hot mothballed.  Chemical shops were also halted. The city lost heat supply as a result of a major voltage dip at the plant.

To remind: since June 2014, 320 shells exploded on the plant territory, 9 Avdiivka Coke employees were killed, over 50 were wounded. For the last several months, the enterprise has been operating on two high voltage feeds instead of four required.

Private JSC Avdiivka Coke Plant is Europe’s largest high-tech coking plant. The plant makes 31 types of products. It has customers in Ukraine, Russia, Poland, Georgia, Belgium, Tajikistan, Turkey, and Egypt. Its key products are blast furnace coke, electrode pitch coke, and crude benzene. Avdiivka Coke makes 23% of Ukraine’s bulk coke.  The plant produced 1.9 million tons of blast furnace coke in 2015. The plant runs seven coke oven batteries, with a design capacity of 5.910 million tons of bulk coke per year. The enterprise is self-sufficient in terms of energy resources, including process steam, heating and electricity. Avdiivka Coke produces more than 50% of blast furnace coke with an advanced and environmentally friendly dry quenching process. Avdiivka Coke received a certificate for actively participating in the implementation of environmental policy at the regional level at the “Ecology in an Industrial Region” second international environmental forum by the National Environmental Protection Administration in Donetsk Oblast in 2012. At the end of 2015, the products of Avdiivka Coke were recognized with a Quality Star of the National Rating for goods and services quality. Avdiivka Coke, together with the Shakhtar Football Club opened a football school for children in Avdiivka; the school currently has 60 students.

Metinvest Group is a vertically integrated group of steel and mining companies that manages every link of the value chain, from mining and processing iron ore and coal to making and selling semi-finished and finished steel products. It comprises steel and mining production facilities located in Ukraine, Europe and the US, as well as a sales network covering all key global markets. Its strategic vision is to become the leading vertically integrated steel producer in Europe, delivering sustainable growth and profitability resilient to business cycles and providing investors with returns above industry benchmarks.

The major shareholders of METINVEST B.V. (the holding company) are SCM Group (71.24%) and Smart-Holding (23.76%), which partner in the Group’s management.