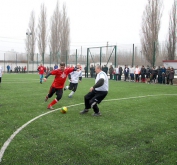 As part of the major reconstruction of the stadium, Avdiivka Coke built a mini football pitch with artificial turf in 2013. Construction of two playgrounds is in the final phase. The administration-amenity sections of the stadium underwent a major renovation.  Modern shower rooms and sanitary facilities were equipped, walls and flooring were replaced, new furniture and lockers were installed, and individual heating was installed. Now, players have a comfortable place to prepare for matches. A separate room for referees was setup in the building.

Yuriy Cherkasov, Avdiivka mayor: "The office building used to be a constant cause of concern - cracks in walls, missing tiles and leaky roof... Now, this is an excellent building that provides comfortable conditions for athletes to change and take showers after competing. I am sure that this stadium will become a leading sports facility in our city."

Musa Magomedov, Avdiivka Coke general director: "Every city should have modern facilities for people to pursue healthy and active lives, for athletes and for youth. As such, the refurbishment of the stadium was a priority for Avdiivka Coke and we invested a lot of effort to implement this project. We would like to see more such sports centers, so the refurbishment of city stadiums will continue."

The company is planning to replace the fence around the stadium, build a basketball court, and more. To date, Avdiivka Coke has already invested UAH 1.7 million in the project.