Avdiivka’s competition for the best park and square names continues 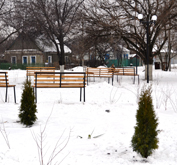 Metinvest Group’s Avdiivka Coke Plant created three new recreation zones in the city – a park and two squares. Avdiivka City Council, jointly with the coke makers, announced a competition for the best names for these locations.

Three winners will be determined who will propose the best name to the new park in Gagarina Street, a square on Soviet Street and a square that was built two years ago on Communal Street.

City residents started to suggest names on 12 December. The recreation area in Gagarina Street is frequently suggested to be named Coke Makers Park. For the squares, more romantic and cheerful names have been proposed – Joy Square, Star Square, Dating Square, Happy People Square, and the Square of Love.

Following many requests, the organizers decided to extend the competition’s due date to 17 January. The terms and conditions of the competition are available on the city council’s website.