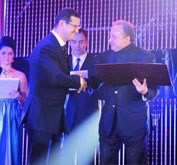 Avdiivka Coke's employees received honorary government awards during the celebration of the plant's 50th anniversary. Ten employees of the plant were awarded for many years of dedicated work for the benefit of the country and the region.

Vadim Fomin, deputy chairman of the Donetsk Regional State Administration, distributed the awards on behalf of the president and the Cabinet of Ministers of Ukraine during the celebration of Avdiivka Coke's 50th anniversary.

Honors from the prime minister of Ukraine were given to Aleksandr Norkin, senior foreman of the coke preparation shop, and Sergey Shmalko, district heating manager.   Certificates of Merit were awarded by the Cabinet of Ministers of Ukraine to Nikolay Skidan, wagon tippler operator, and Leonid Dusheba, senior foreman of the production department. "Labour and Valour" Medals were awarded to fitters Valery Melnik, Anatoliy Kostiuk and Raisa Chirina.

The plant's team were also awarded medals and Certificates of Merit by the Cabinet of Ministers of Ukraine to recognize their significant contribution to developing the country's steel industry and labour achievements as well as to honour the 50th anniversary of Avdiivka Coke.

"Avdiivka Coke is a top performing plant that continuously pursues improvement and introduces process innovations.  That being said, it would have been impossible to succeed without the team's support and collaboration,” said Musa Magomedov, Avdiivka Coke's general director. "We have wonderful, talented and dedicated people working at the plant.     Their commitment helps the plant develop and demonstrate their significant achievements."