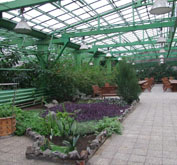 On the eve of its 50th anniversary, Avdiivka Coke invited representatives of the regional and local media to tour the plant. Guests were shown coal processing, coke production and air cleaning processes at the plant.

The tour started with the coal processing plant of Coal Preparation Shop #1. The shop accepts, handles, stores, proportions, crushes and blends coal and delivers a ready blend to the coal tower. The coal processing plant incorporated into the shop is unique to Avdiivka Coke. The plant is designed to process 6,000,000 tons of run-of-mine coal per year. In recent years, actual output was approximately 3,000,000 tons.

"Avdiivka Coke was built on a new site, away from large enterprises, and had to provide supplies for its own operations and heating, transportation and sewer water treatment services to the city and Avdiivka enterprises that emerged later," said Aleksey Bobyr, deputy head of Avdiivka Coke's production department.

Tour guests also observed the process of dry coke quenching with inert gas. This method uses advanced environmental technology; Avdiivka Coke was the first of two coke plants in Ukraine to implement it. As a result, the enterprise not only produces high quality coke, but also significantly reduces emissions into the atmosphere and generates electricity for internal consumption.

In 2010, a two-stage plant for hydrogen sulphide removal from coke oven gas was commissioned in Desulphurization Shop #1 and Alfa Laval spiral cooling condensers were installed. The modernization was aimed, first of all, at improving the environmental situation at the enterprise and allowed for deeper cleaning of coke oven gas from hydrogen sulphide for further use to heat coke oven batteries #1-5 and combined heat and power plant boilers.

"We are upgrading the equipment in the coke shops and in the desulphurization shops, which provides for significant reductions in the amount of emissions into the atmosphere," said Musa Magomedov, Avdiivka Coke's general director. "We reduced emissions by 560 tons last year alone. Avdiivka Coke was seventh among 1,200 enterprises in 2012 regarding the size of investments into air quality. In a day or two, the installation of a unit for catalytic post-combustion of gases from the coal tar pitch granulation unit will be started. That unit will be commissioned already in January 2014."

The plant's territory is home to not just production facilities. The plant also has a local pheasantry and greenhouse. Avdiivka school students take environmental class trips as part of the "Green Class" program.

"Birds that traditionally prefer to live in ecologically clean areas - pheasants, partridges, peacocks, and white swans, white Canadian geese, silver mallards, decorative chickens and pigeons - feel comfortable in the pheasantry. There are also a couple of foxes that live here," said Nina Vinichenko, zoological expert. "In addition, this place has taken on the role in the city as a centre for the rehabilitation of wild birds and animals."

The plant's greenhouse is a unique botanical garden in Avdiivka. It has several species of palm trees - date palms and Washington filifera palms (so-called Mertsalova palms), four species of ficus, laurels, agaves, species of aloe, cacti, species of yucca, roses, dracaena, as well as lemon, persimmon, fig, geranium, fern, tradescantia, and water hyacinth. The cultivation and preservation of the latter species used for wastewater treatment is an area of special care, as their features include rapid growth, reproduction and intensive absorption of almost all biogenic elements and compounds from water.

During the press tour, journalists also visited facilities built as part of the social partnership program with the city. This included a park being built in the central part of Avdiivka, the mini-football field and changing room equipped with new furniture at the refurbished stadium; the children's playground on the territory of one of the largest and most populated condominiums of the city; and one of Avdiivka's oldest schools, where 89 windows were replaced with the modern plastic steel windows.

"When developing the plant, the workers of Avdiivka Coke Plant do not forget the city that they live in," says Oksana Tregubchuk, Avdiivka Coke's manager of regional development. "In 2013, Metinvest Group plans to invest almost UAH 5.2 million into the implementation of regional partnerships programs to develop Avdiivka."