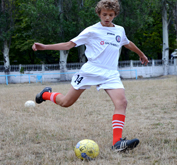 In the framework of Metinvest corporate program "The development of youth football" and in a partnership of Shakhtar Football club the first class of young sportsmen were graduated from Avdiivka children's football school. Four children among sixteen graduates have already continued his professional sport career in Donetsk football clubs.

Avdiivka and children's football school of Metinvest Group are proud of this year's graduates. One of the most talented boys are Nikita Klimenko and Nikita Tarasov, playing in the first team of FC "Olympic" (Donetsk ). And Alexander Wiener will continue his professional training in FC Metallurg football academy.

Football school for children in Avdiivka town has been opened in April 2011 as a part of Palace of Culture, Techniques and Sports of PJSC “Avdiivka Coke Plant”. At the moment about 100 children go to this school, 6 football teams were created consisting of the boys aged from 7 to 12 years.

Metinvest took all the school costs. Besides financing the current school activity, support 3 trainers and medicine staff, purchasing the required sports equipment like forms and balls, Metinvest invests in expanding and improvement of training and sports base.

Training is carried out at stadium, where a new mini-football field with artificial turf soon will open. During training, students attended school football tournaments in Kerch, Sevastopol, Mariupol and other Ukrainian town. Avdiivka children got a brilliant victory at national football tournament for the Cup "Golden Autumn" in 2011. In 2012, the team took part in an international tournament "Peoples Friendship" and took fourth place. A prime event for the students is the annual youth tournament for The Cup of Metinvest.

This year, The Cup takes place from September 17 to 21 in Mariupol. Young Avdiivka sportsmen will compete with pupils of Metinvest junior football academy branches from Lugansk, Yenakievo Hartsyzsk , Makeevka , Krivoy Rog , Mariupol, Dzerzhinsk. This year's tournament involved 15 teams. Avdiivka team will represent the older age. Award ceremony for the tournament winners will be held at the stadium Donbass Arena in Donetsk, during a break in the football match Shakhtar--Vorskla.

- We want our young players have a good attitude to the game, the team understanding, worthy competitors. We are waiting for you to exciting game moments, rapid attacks and beautiful goals. Come back from The Cup of Metinvest with a victory! – said Musa Magomedov, CEO of Avdiivka Coke Plant.