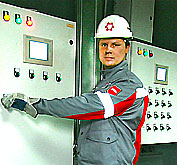 Metinvest is an international vertically integrated metal and mining company within the framework of constant improvements implements the modernization of equipment in coal preparation shops. In the framework of this plan package a new modern system of automatic control system in production process (ACSPP) has been installed as well the old jigging machines which separate coal from the rocks also has been substituted. The total investments amounted to almost 10 million UAH.

The modernization is directed at reduction of carbonized coal concentrate losses in the process of run-of-mine coal cleaning and the efficiency of raw materials using. In compare the jigging machines with old control system in production new one with AMTP can reduce the losses of the concentrate output up to 0.704 t/h.

In addition, new equipment and implementation of automatic control system in production process will ensure technology compliance while the process of preparation coal blends, which has a positive effect on the qualitative characteristics of the carbonized coke. Thus, the installation of automation systems for flotation machines allows to obtain a concentrate with a stable ash content.