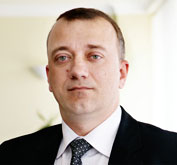 Yury Zinchenko possesses a vast practical experience in the steel industry. Starting 1997, he worked at Azovstal Iron and Steel Works, where he grew from blast-furnace forehearth operator position to the Head of the Technical Department. In April 2009, Yury Zinchenko was appointed as the Chief Engineer of Khartsyzsk Pipe Plant, and starting September 2010 – Interim General Director of the enterprise.

For the period of his appointment as the Interim General Director of Khartsyzsk Pipe, within the frames of the large scale modernization, reconstruction and equipment upgrade programme implementation, covering all Metinvest’s steelmaking enterprises, Khartsyzsk Pipe continued implementation of the production modernization and existing equipment reconstruction projects, products quality control based on the world standards.

Metinvest is an international vertically integrated mining and steel group of companies, operating assets in each link of the production chain from iron ore and coal mining and coke production, through to semi-finished and finished steel production, pipe rolling and coil production and production of other value-added products. The Group comprises mining and steel production facilities located in Ukraine, Europe and the USA and has a sales network covering all key global markets. The major shareholders of Metinvest are SCM Group (75% ownership) and Smart-Holding (25% ownership) partnering in Company’s management.

METINVEST HOLDING, LLC – is the managing company of Metinvest Group.